When working with data in Javascript we usually rely on arrays and objects as primary way to store data. There are in fact a lot of different way to structure our data and each one of them has some pros and cons and a practical usage. Linked List are a type of data structure that isn't talked too much and, especially when it comes to interview, seems to be a topic quite scaring.

I am not entering into the discussion of the algorithm/data structure interview for a FrontEnd (there is enough fire out there about it), but Linked List can be pretty useful compared to array, and they have a lot of advantages.

All the code is available on github.

Linked list is a very simple type of data structure where each Node has a pointer to the next node.

Linked List have no indexes. You cannot do MyLinkedList[1] to get your item (we will implement our own method for it), but this is a good think because it makes insertion and deletion very fast compared with Array, this is because we don't need to re-index the list.

Array are of a fixed size while Linked List are dynamic in size. If this is not clear look at this image. 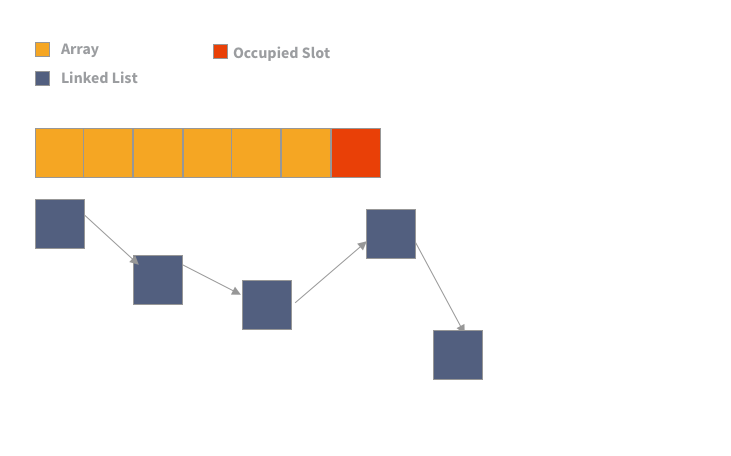 The orange slots are the one occupied by the array. Once we declare our array const arr = [1,2,3,4,5] a slot of memory is assigned to this data. You can see that the slots occupied by the array are contiguous. If you look at the blue one, taken by the linked list, we can see instead that is dynamic, because each node is going to take his own space, and we jut have pointers.

The red slots indicateds a slot that is already occupied, at this point if we add a new item to the array the entire array will have to be relocated in memory, while with a Linked List the next added node it will just take the next available slot.

It might seems confusing but in fact you don't need to know all this memory stuff, it's just good to know what is the main difference with Arrays. So to recap:

If you do very often insertion and deletion of element, then go for a Linked List. If you need often random access go for an array If you need to traverse the data often, then again array is a better solution.

If you think about it, a Linked List is basically a Node that points to another node (the next) but cannot go back (there are Doubly Linked List for this), it can grow dynamically and it has a start and a end (head and tail). This makes it perfect for example for a Learning Path or a Lesson Plan. Once you attended lecture one, then the next step might only lecture two, and so on.

Also, level of videogames can be seen as Linked List, you play on the first level once you finish that level you can only go to the next one.

These are some of the example that just came in my mind right now, I am sure that there are a lot more.

So I think it's about time to start coding something and build our own Linked List. Here some notes to consider:

Naming: Linked List, unlike arrays have no built-in methods, that means we have to build our own. For simplicity I will try to use the same naming as array. but this is not a rule. For example I like to call the method to remove the Tail (last element of the list) pop, like array. But you could call it removeTail. I prefer pop because in fact we do not remote the tail, the previous Node will be our new tail.

Coding Style: I am using ES6 classes, just to make the readability a bit easier. You can use function if you want, in the end this is what a ES6 class is so feel free to use whatever you want.

Comments: While learning these data structures commenting my code very often helped me to better remember what I did when I came back to it after some months :D Anyway, I am just warning you that I will add a lot of comment, hoping this will help to better understand what is going on.

First we build our Node and then our SinglyLinkedList Class:

We will often need to check if our linked list is empty. We can use one of the 3 main elements of the list to verify if empty and return either true or false. Let's add this little helper then

Now we have a Node class and out SinglyLinkedList class, we can now add our first 2 methods. We can start with removing the head and the tail. For this we need 2 methods:

Let's look first at the logic for removing the head. First we look at the edge cases:

After considering these 2 cases we know now that the head exists and it has a next Node, which is going to be our new Head. So it's just a matter of setting head.next to be the new head.

I hope the comments are clear. This is pretty easy, we just have to be careful with the edge cases.

Popping a node from the list, in this case the tail, is a little bit different than removing the head. In this case we need to traverse the list until we reach the end, the tail, we need a reference to the previous node wich will be our new tail. Always remember the edge cases. The steps are:

Now we want to add a new Node that will be the new head, so like in array we want to have a unshift method that adds his node to the beginning of the list. Here is where Linked List really shine and win easily. What we have to do is just to set the new node to be the head and the head to be the next of this node. Steps:

Remember that all this methods works in place, we are mutating the list in place.

Now we want to add a new item to the end, the tail. This is also very easy and fast. Here the steps:

Ok, so now we have our basic methods. We now want to implement some helpful methods:

Let's start with the simple one. Empty the list

Self explanatory I would say.

Traversing the list is easy, we just go to the next node 'till we hit null. This method might come handy for some next other methods. We can add a callback to the method, so that we can then reuse the value or node to do something. I'll call this method run, I just like it more than traverse.

We can search in a Linked List either based on the index or the value. For the value is pretty easy to do. Just loop through all the list until you find the value you are looking for.

Now it's time to add a search method for the list. I am saying here search, but probably findAt is a better name for the method. We pass the index and we return the node that we have found. As I explained before, we must loop through the list in order to find our node.

It's time now to update a value. This is now really easy, we just created a fintAt method that we can reuse here to get the element, using the index, and then we just need to update the value val. The only check we have to do is to see if he value exists or not:

Allright! So we get nodes, we update them we remove and add new nodes but only at the beginning and at the end, we want also to add an element at a certain index or remove it. So let's start with our insert method

This also should not really be hard to undertand. Basically what we do is that we add the new node at the index and we move the value that was at that index after.

And now we can remove the node, this time we only need the index.

The first time I approached it, without looking at any tutorial, I made the mistake of thinking to it as an array. For example in an array you have this:

And reversing it means to return this:

With linked list is different. To better understand what it means, let's look at it visually: You start with this:

And you have to return this:

So basically that means:

There are 2 ways to reverse a Linked List. We can do it using a loop, a for loop or while lopp, or we can do it with recursion.

Recursion is more elegant as solution, but it uses more memory because each time the function calls itself and it creates a new context.

I also, honestly, get easily confused with recursions. I will do with both, first using a loop then using recursion.

So the logic behind is:

One thing that I must specify here, we are reversing the Linked List in place, we are not returning a new list, it would be too easy. :D

Ok, so now it's time for recursion. The concept is always the same, but first we reverse the list using a recursive function, then finally we swap head and tail.

This can be a little confusing, but the idea is basically the same, looping trough the list and swap the pointer next to point to the previous.

Recursion can be confusing, and to be honest I think, at least in this case, makes the code less readable compare with the classic while loop.

All the code for this tutorial can be found on github.